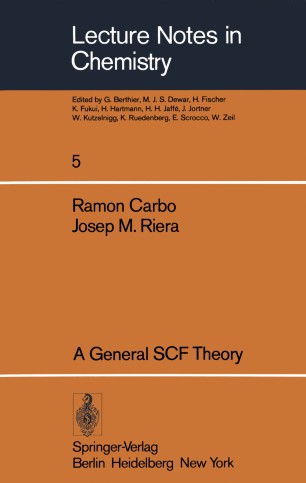 We live in a molecular world, almost closed shell in nature, and for this reason Chemistry has been a science dealing with closed shell mol­ ecules. However, the high degree of experimental sophistication reached in the past decade has made more apparent the role of open shell structures in chemical research. A parallel phenomenon can be observed in the development of SCF theory, where closed shell molecular calculations at any level of complexity compose the main body of references which can be obtained in Quantum Chemistry today. Besides the linkage between experimental and theoretical behaviour, there are, obviously, other reasons which can be attached to a lack of molecular open shell calculations. Among others, there was no connec­ tionbetween closed or open shell theoretical treatments. In this manner, many computational features used by closed shell connoisseurs have not been extended to other computational areas. Since the work of Roothaan in 1960, the open shell molecular landscape has been, the­ oretically, a very closed one. Further development of SCF theory, which has led to an outburst of multiconfigurational procedures, has paid no, or very faint, attention to the interconnection between these SCF theory advanced features, the open shell framework and closed shell common practice. A good theoretical goal, generally speaking, and in particular inside SCF theory, may consist of a procedure which can be used to solve a given chemical problem, within the physical and approx­ imate limits of the theory.