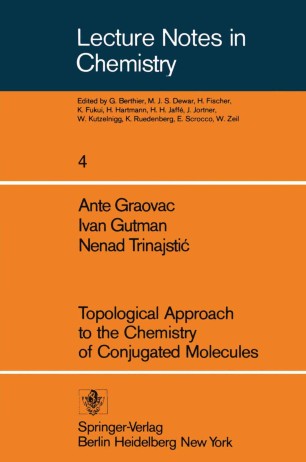 Topological Approach to the Chemistry of Conjugated Molecules

"The second step is to determine constitution, Le. which atoms are bonded to which and by what types of bond. The result is ex­ pressed by a planar graph (or the corresponding connectivity mat­ rix) •••• In constitutional formulae, the atoms are represented by letters and the bonds by lines. They describe the topology of the molecule." VLADIMIR PRELOG, Nobel Lecture, December l2;h 1975. In the present notes we describe the topological approach to the che­ mistry of conjugated molecules using graph-theoretical concepts. Con­ jugatedstructures may be conveniently studied using planar and connec­ ted graphs because they reflect in the simple way the connectivity of their pi-centers. Connectivity is important topological property of a molecule which allows a conceptual qualitative understanding, via a non­ numerical analysis, of many chemical phenomena or at least that part of phenomenon which depends on topology. This would not be possible sole­ ly by means of numerical (molecular orbital) analysis.