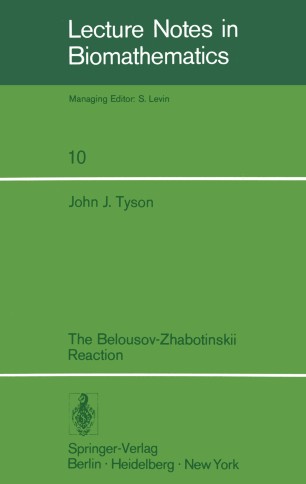 In 1958 B. P. Belousov discovered that the oxidation of citric acid by bromate in the presence of cerium ions does not proceed to equilibrium methodically and uniformly, like most chemical reactions, but rather oscillates with clocklike precision between a yellow and colorless state. See Fig. 11. 1, p. 30. A. M. Zhabotinskii followed up on Belousov's original observation and in 1964 his first investigations appeared in the Russian journal Biofizika. Though H. Degn (in Copenhagen at the time) knew of Zhabotinskii's work and published his own account of the mechanism of oscillation in Nature (1967), this interesting reaction attracted little attention among Western scientists until 1968, when Zhabotinskii and his coworkers and Busse (from Braunschweig, W. Germany) reported on their work at an international conference on biological and biochemical oscillators held in Prague. Shortly thereafter appeared· a flurry of papers on temporal oscillations and spatial patterns in this reaction system. Vavilin and Zhabotinskii (1969) [and later Kasperek and Bruice (1971)] studied the kinetics of the oxidation 3 of Ce+ by Br0 and the oxidation of organic species by Ce+4. Busse (1969) 3 reported his observation of colored bands of chemical activity propagating up and down in a long tube of unstirred solution. Zaikin and Zhabotinskii (1970) observed circular chemical waves in thin layers of solution.