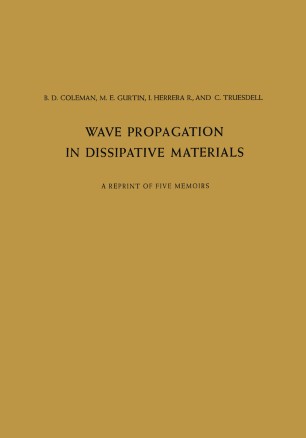 A Reprint of Five Memoirs

Common experience reveals two basic aspects of wave propagation. First, while preserving their identity and travelling at definite speeds, sounds finally die out. Second, weak sounds may combine to form strong noises. Theories of acoustic propagation have succeeded in representing these aspects of experience separately, but never combined as in nature. The classical theories of sound in perfect fluids and elastic solids easily yield common speeds of propagation for plane infinitesimal disturbances, but no damping. Moreover, within EULER'S theory of the perfect fluid, or its generalization, the GREEN-KIRCHHOFF-KELVIN theory of finite elasticity, weak waves may grow stronger and become shock waves, which propagate according to more complicated but equally definite principles. Effects of internal damping are easily added for theories of infinitesimal deformation, but for finite motions a dead end was reached about sixty years ago. Indeed, in 1901 DUHEM proved that according to the NAVIER-STOKES theory of fluids acceleration waves and waves of higher order cannot exist, and for shock waves he claimed a similar result, which has since been shown to be valid subject to certain qualifications. So as to save the phenomena of sound and noise, as was necessary if the NAVIER-STOKES theory was to deserve the place proposed for it as a refinement upon EULER'S theory, DUHEM introduced the concept of "quasi-wave", a region of rapid but continuous transition.