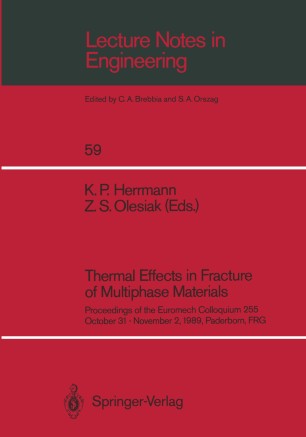 This book contains a selection of the lectures presented at the Euromech Colloquium 255, held at the Liborianum, Paderborn, from 31 October to 2 November 1989. The subject of the Colloquium "Thermal Effects in Fracture of Multiphase Materials" attracted about 50 scientists from 13 coun­ tries. Several well known scientists who are active in research on thermal effects in fracture proces­ ses were present at the Colloquium as lecturers (29 lectures were delivered) as well as valuable participants of the intensive discussions which took part during the sessions, coffe breaks and lunch times. The closing session of the Colloquium was devoted to a general discussion on the trends in the development of the research in the field, the prospects of the theoretical research, new materials (composites, ceramics etc. ), and the trends in technological applications. Over twenty comments and remarks have been made during this final general discussion, showing the interest of the audi­ torium in such an exchange of viewpoints. However, this discussion is not reflected in this volume. The Colloquium has been subdivided into six sessions: I "Thermodynamics of Fracture Processes" II . "Fracture of Nonhomogeneous Solids" III "Thermal Cracking of Heterogeneous Materials" IV-VI "Fracture Phenomena in Composite Systems I-III" One of the main topics in session I consisted in the description of the influence of thermal effects on shear band localization failure. Thereby shear bands nucleate due.