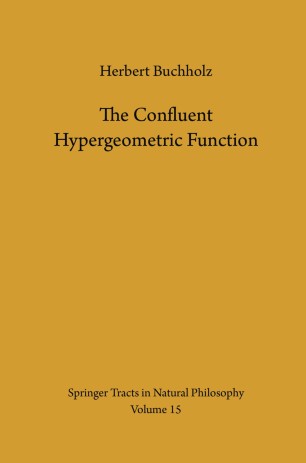 with Special Emphasis on its Applications

The subject of this book is the higher transcendental function known as the confluent hypergeometric function. In the last two decades this function has taken on an ever increasing significance because of its use in the application of mathematics to physical and technical problems. There is no doubt that this trend will continue until the general theory of confluent hypergeometric functions becomes familiar to the majority of physicists in much the same way as the cylinder functions, which were previously less well known, are now used in many engineering and physical problems. This book is intended to further this development. The important practical significance of the functions which are treated hardly demands an involved discussion since they include, as special cases, a number of simpler special functions which have long been the everyday tool of the physicist. It is sufficient to mention that these include, among others, the logarithmic integral, the integral sine and cosine, the error integral, the Fresnel integral, the cylinder functions and the cylinder function in parabolic cylindrical coordinates. For anyone who puts forth the effort to study the confluent hypergeometric function in more detail there is the inestimable advantage of being able to understand the properties of other functions derivable from it. This gen­ eral point of view is particularly useful in connection with series ex­ pansions valid for values of the argument near zero or infinity and in connection with the various integral representations.