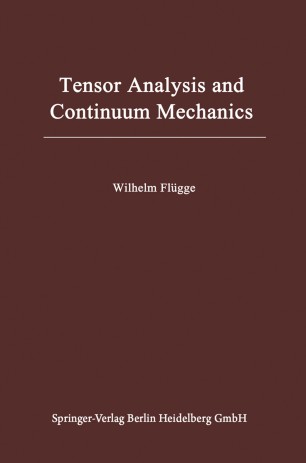 Through several centuries there has been a lively interaction between mathematics and mechanics. On the one side, mechanics has used mathemat­ ics to formulate the basic laws and to apply them to a host of problems that call for the quantitative prediction of the consequences of some action. On the other side, the needs of mechanics have stimulated the development of mathematical concepts. Differential calculus grew out of the needs of Newtonian dynamics; vector algebra was developed as a means . to describe force systems; vector analysis, to study velocity fields and force fields; and the calcul~s of variations has evolved from the energy principles of mechan­ ics. In recent times the theory of tensors has attracted the attention of the mechanics people. Its very name indicates its origin in the theory of elasticity. For a long time little use has been made of it in this area, but in the last decade its usefulness in the mechanics of continuous media has been widely recognized. While the undergraduate textbook literature in this country was becoming "vectorized" (lagging almost half a century behind the development in Europe), books dealing with various aspects of continuum mechanics took to tensors like fish to water. Since many authors were not sure whether their readers were sufficiently familiar with tensors~ they either added' a chapter on tensors or wrote a separate book on the subject.