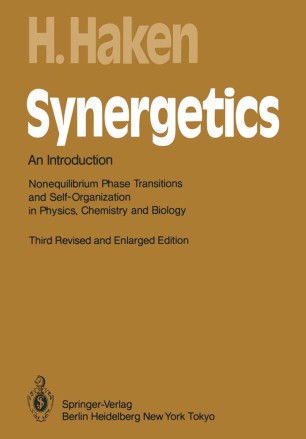 Over the past years the field of synergetics has been mushrooming. An ever­ increasing number of scientific papers are published on the subject, and numerous conferences all over the world are devoted to it. Depending on the particular aspects of synergetics being treated, these conferences can have such varied titles as "Nonequilibrium Nonlinear Statistical Physics," "Self-Organization," "Chaos and Order," and others. Many professors and students have expressed the view that the present book provides a good introduction to this new field. This is also reflected by the fact that it has been translated into Russian, Japanese, Chinese, German, and other languages, and that the second edition has also sold out. I am taking the third edition as an opportunity to cover some important recent developments and to make the book still more readable. First, I have largely revised the section on self-organization in continuously extended media and entirely rewritten the section on the Benard instability. Sec­ ond, because the methods of synergetics are penetrating such fields as eco­ nomics, I have included an economic model on the transition from full employ­ ment to underemployment in which I use the concept of nonequilibrium phase transitions developed elsewhere in the book. Third, because a great many papers are currently devoted to the fascinating problem of chaotic motion, I have added a section on discrete maps. These maps are widely used in such problems, and can reveal period-doubling bifurcations, intermittency, and chaos.