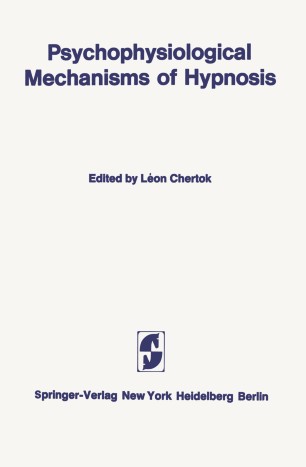 It seemed appropriate for the First International Symposium on the Psychophysiological Mechanisms of Hypnosis to be held in France, the country where hypnosis was rediscovered with the work of MESMER and where somnambulism was first described by his student, the MARQUIS DE PUYSEGUR. The classic studies of such authorities as CHARCOT, JANET, BERN­ HEIM, BINET, and FERE, as well as many lesser known French scholars, have provided many of the concepts that remain significant to this day. There have been many periods in the history of hypnosis when out­ standing members of the scientific community became intrigued and fascinated with the phenomenon, only to lose interest and allow it to become the province of the charlatan and fiction writer. The Second W orId War provided considerable impetus to the clinical use of hypnosis and since then there has been an enduring revival of both scientific and clinical interest. Nevertheless, though research using hypnosis or attempting to clarify its nature has become recognized as an appropriate scientific endeavour in much of the world, a great many barriers of communication, including not only those of language but, perhaps even more troublesome, those of theoretical orientation and disciplinary interest, have remained a serious impediment to progress.