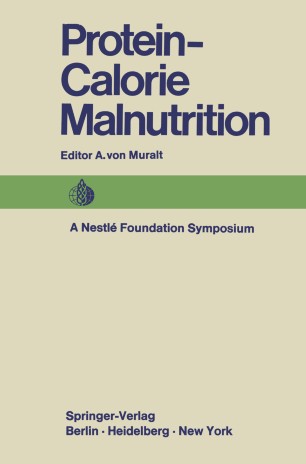 Hunger is the world problem Nr 1, overshadowed by an uncontrollable explosion of the human population all over our planet. Lack of food has been one of the most primitive dangers, which animal life had to face at every stage of its evolution. The living body developed in the course of this evolution special emergency reactions against this danger, which is characterised by a lack of food calories, a lack of nitrogen in the form of proteins, a lack of vitamins and oligo elements. Based on an intricate physiological defense pattern man can support complete starvation up to one month, by using up the substance of less important organs in order to maintain the functional matrix of the important organs, mainly the brain and the nervous system. This regulation and the pattern of its mechanisms are of great interest to the physiologist who is aware that they are also responsible for the maintenance of life among millions of human beings who desperately live in a state of permanent hunger. The most serious problem in many developing countries is not the supply of calories (mainly carbohydrate calories) or the supply of vitamins and oligo elements, but the supply of a sufficient amount of protein in order to overcome the protein-calorie malnutrition. This problem must be considered as the most urgent one among all the other problems in the fight against hunger.