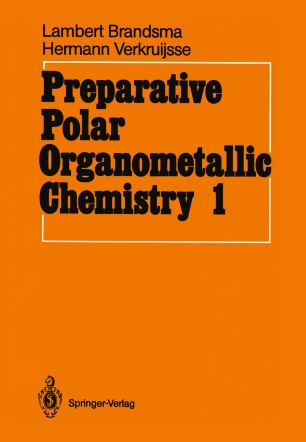 Polar organometallic compounds are indispensable for the synthetic chemist. As this book shows, these almost ideal reagents are easy to prepare with high specificity under mild conditions and yet react quite readily with a great variety of substrates. Many compounds can be metallated directly at positions which would otherwise be difficult to substitute. Functional groups and heteroatoms already present in a molecule direct metallation to sites in their vicinity. The rules which govern polar organometallic chemistry often are not dominated by the usual n-delocalization and inductive effects; dipolar interactions, chelation, polarization, etc. often can be much more important. This affords novel synthetic opportunities. A good example is the development of a basically new type of aromatic substitution chemistry not based on positively charged intermediates. Seebach's injunction, "Thinking of polar organometallic compounds as carbanions is an impoverishment rather than a simplification" (International Symposium, Chemistry of Carbanions, Durham 1984), stresses the need to consider the metal not only as an integral, but perhaps also as the key component of these reagents. Rather than wandering off as solvated cations and acting as uninvolved spectators, the metals, rather than the anion moieties, can initiate and govern the subsequent reactions. To the founders of this field, e. g. Grignard, Ziegler, Gilman, Wittig, and their followers, the metal was critical. The title of Schlosser's book, "Polare Organometalle", certainly was apt.