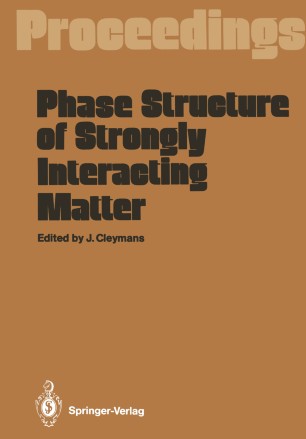 Proceedings of a Summer School on Theoretical Physics, Held at the University of Cape Town, South Africa, January 8–19, 1990

The 6th Advanced Course in Theoretical Physics was held at the University of Cape Town, January 8-19, 1990. The topic of the course was "Phase Structure of Strongly Interacting Matter". There were ten invited speakers from overseas, each having up to six hours in which to present his field of research to a relatively small audience of about 50 participants. This allowed for the presentation of a broad, coherent and pedagogical review of the present status of the field. In addition there were several one-hour presentations by local participants. The main emphasis of the course was on the study of the properties of high­ density hot nuclear matter. This field is of particular interest because of the belief that a deconfined quark-gluon plasma could be created in such an environment when the temperature reaches about 200MeV. In the nuclear regime a so-called "liquid-to-gas" phase transition is expected at a temperature of approximately 10- 20MeV. Both of these topics received ample attention at the school. Owing the nature of the field, there exists much overlapping interest from both the nuclear physics and high-energy particle physics communities. It is hoped that these proceedings will contribute to building a bridge between the two groups.