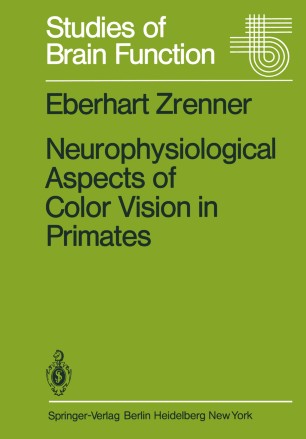 "To explain all nature is too difficult a task for anyone man or even for anyone age. Tis much better to do a little with certainty, and leave the rest for others that come after you, than to explain all things ... " Sir Isaac Newton (1642-1727) This book describes and discusses some new aspects of col­ or vision in primates which have emerged from a series of experiments conducted over the past 8 years both on single ganglion cells in monkey retina and on the visually evoked cortical potential in man: corresponding psychophysical mechanisms of human perception will be considered as well. An attempt will be made to better understand the basic mechanisms of color vision using a more comprehensive approach which takes into account new mechanisms found in single cells and relates them to those found valid for the entire visual system. The processing of color signals was followed up from the retina to the visual cortex and to the percepq.tal centers, as far as the available techniques permitted.