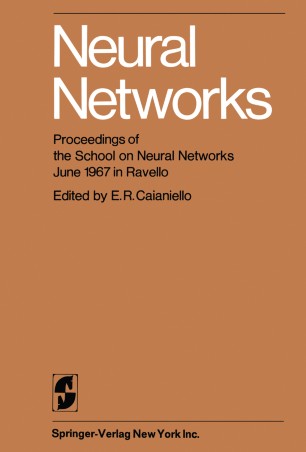 Proceedings of the -School on Neural Networks - June 1967 in Ravello

Sciences may be nowadays grouped into three classes, having as their subjects of study respectively Matter, Life and Intelligence. That "Intelligence" may be studied in a quantitative manner is a discovery of our age, not less significant in many ways than the 17th ceiltury realization that celestial phenomena are of one and the same nature as terrestrial and all other physical accidents. As the latter was accomplished through and accompanied by a major revolution in philosophy and method, so is now the scientific investigation of intelligent phenomena - although harely begun - already causing an unprecedented revolution in all our previous conceptions as mind and machine, society and organization. What electronic com­ puters have already accomplished in disclosing perspectives to sciences and imposing new approached to management is but a negligible change, if compared to those yet in store, which will closely follow the understanding of the many as yet unknown functional principles which make nervous systems act and react the way they do. The study of Neural Networks is the key point in the systematic quantitative investigation of such phenomena. With patience and humility, neuroanatomists and physiologists try to connect structure with function in systems of neurons which are "simple" enough to be studied with the extant techniques, either because of the paucity of their elements or because of the high degree of symmetry these possess (e. g.