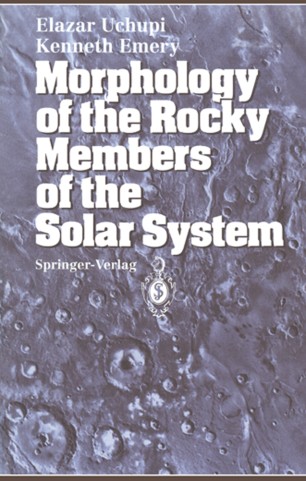 Morphology of the Rocky Members of the Solar System

These words are written on the SOOth anniversary of Columbus' discovery of the New World. Surely the deep-space exploration of other worlds in our Solar System over the past few decades is an event of similar magnitude. Man has traveled far enough to see Spaceship Earth suspended alone in black space. And he has voyaged even farther to marvel at the crescent Earth rising over the Moon's cratered terrain. Instrumented spacecraft have toured the entire Solar System even beyond the ninth planet Pluto. This work of science Morphology of the Rocky Members of the Solar System is an inquiry about our extended home. As with the Darwinian and Copernican paradigms, the nature of our planetary system, as the extended world around us, has great significance for those who ponder the human condition. The deep-space views of our Planet Ocean with its sweeping clouds, and moving oceans and creeping continents must rank as the greatest photograph ever taken. Viewing Spaceship Earth hanging in the vast void is an almost frightening experience. We are so alone! It is easy to understand why so many are attracted to a simpler account of origins, like the allegorical tale of creation written in heroic style (but eschewing math, maps, figures, tables, references, and evidence) in the first eleven chapters of Genesis. This treatise examines the morphology of the six rocky planets and their 27 satellites from a broad perspective.