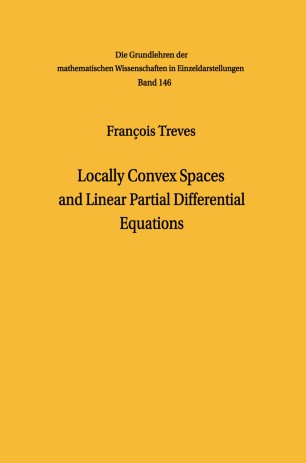 It is hardly an exaggeration to say that, if the study of general topolog­ ical vector spaces is justified at all, it is because of the needs of distribu­ tion and Linear PDE * theories (to which one may add the theory of convolution in spaces of hoi om orphic functions). The theorems based on TVS ** theory are generally of the "foundation" type: they will often be statements of equivalence between, say, the existence - or the approx­ imability -of solutions to an equation Pu = v, and certain more "formal" properties of the differential operator P, for example that P be elliptic or hyperboJic, together with properties of the manifold X on which P is defined. The latter are generally geometric or topological, e. g. that X be P-convex (Definition 20. 1). Also, naturally, suitable conditions will have to be imposed upon the data, the v's, and upon the stock of possible solutions u. The effect of such theorems is to subdivide the study of an equation like Pu = v into two quite different stages. In the first stage, we shall look for the relevant equivalences, and if none is already available in the literature, we shall try to establish them. The second stage will consist of checking if the "formal" or "geometric" conditions are satisfied.