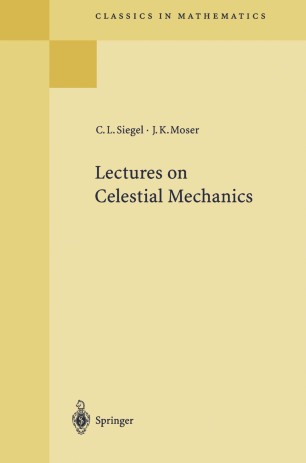 Reprint of the 1971 Edition

The present book represents to a large extent the translation of the German "Vorlesungen über Himmelsmechanik" by C. L. Siegel. The demand for a new edition and for an English translation gave rise to the present volume which, however, goes beyond a mere translation. To take account of recent work in this field a number of sections have been added, especially in the third chapter which deals with the stability theory. Still, it has not been attempted to give a complete presentation of the subject, and the basic prganization of Siegel's original book has not been altered. The emphasis lies in the development of results and analytic methods which are based on the ideas of H. Poincare, G. D. Birkhoff, A. Liapunov and, as far as Chapter I is concerned, on the work of K. F. Sundman and C. L. Siegel. In recent years the measure-theoretical aspects of mechanics have been revitalized and have led to new results which will not be discussed here. In this connection we refer, in particular, to the interesting book by V. I. Arnold and A. Avez on "Problemes Ergodiques de la Mecanique Classique", which stresses the interaction of ergodic theory and mechanics. We list the points in which the present book differs from the German text. In the first chapter two sections on the tri pie collision in the three­ body problem have been added by C. L. Siegel.

Carl Ludwig Siegel was born on December 31, 1896 in Berlin. He studied mathematics and astronomy in Berlin and Göttingen and held chairs at the Universities of Frankfurt and Göttingen before moving to the Institute for Advanced Study in Princeton in 1940. He returned to Göttingen in 1951 and died there in 1981.

Siegel was one of the leading mathematicians of the twentieth century, whose work, noted for its depth as well as breadth, ranged over many different fields such as number theory from the analytic, algebraic and geometrical points of view, automorphic functions of several complex variables, symplectic geometry, celestial mechanics.

Jürgen Moser was born on July 4, 1928 in Königsberg, then Germany. After the war he studied in Göttingen, where he received his doctoral degree in 1952 and subsequently was assistant to C.L. Siegel. In 1955 he emigrated to the USA. He held positions a M.I.T., Cambridge and primarily at the Courant Institute of Mathematical Sciences in New York; from 1967 to 1970 he was Director of this institute. In 1980 he moved to the ETH in Zürich where he now is Director of the mathematical Research Institute.

Moser has worked in various areas of analysis. Besides celestial mechanics and KAM theory he contributed to spectral theory, partial differential equations and complex analysis.