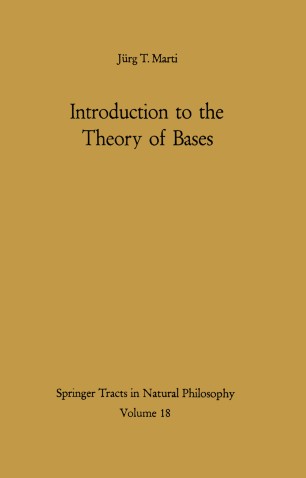 Introduction to the Theory of Bases

Since the publication of Banach's treatise on the theory of linear operators, the literature on the theory of bases in topological vector spaces has grown enormously. Much of this literature has for its origin a question raised in Banach's book, the question whether every sepa­ rable Banach space possesses a basis or not. The notion of a basis employed here is a generalization of that of a Hamel basis for a finite dimensional vector space. For a vector space X of infinite dimension, the concept of a basis is closely related to the convergence of the series which uniquely correspond to each point of X. Thus there are different types of bases for X, according to the topology imposed on X and the chosen type of convergence for the series. Although almost four decades have elapsed since Banach's query, the conjectured existence of a basis for every separable Banach space is not yet proved. On the other hand, no counter examples have been found to show the existence of a special Banach space having no basis. However, as a result of the apparent overconfidence of a group of mathematicians, who it is assumed tried to solve the problem, we have many elegant works which show the tight connection between the theory of bases and structure of linear spaces.