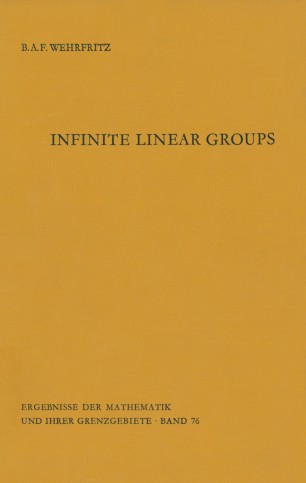 By a linear group we mean essentially a group of invertible matrices with entries in some commutative field. A phenomenon of the last twenty years or so has been the increasing use of properties of infinite linear groups in the theory of (abstract) groups, although the story of infinite linear groups as such goes back to the early years of this century with the work of Burnside and Schur particularly. Infinite linear groups arise in group theory in a number of contexts. One of the most common is via the automorphism groups of certain types of abelian groups, such as free abelian groups of finite rank, torsion-free abelian groups of finite rank and divisible abelian p-groups of finite rank. Following pioneering work of Mal'cev many authors have studied soluble groups satisfying various rank restrictions and their automor­ phism groups in this way, and properties of infinite linear groups now play the central role in the theory of these groups. It has recently been realized that the automorphism groups of certain finitely generated soluble (in particular finitely generated metabelian) groups contain significant factors isomorphic to groups of automorphisms of finitely generated modules over certain commutative Noetherian rings. The results of our Chapter 13, which studies such groups of automorphisms, can be used to give much information here.