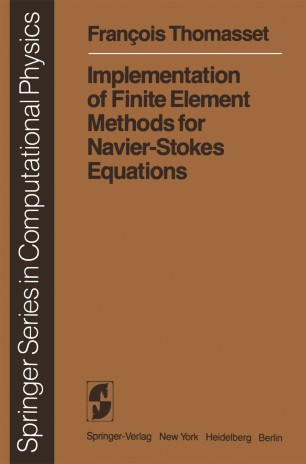 In structure mechanics analysis, finite element methods are now well estab­ lished and well documented techniques; their advantage lies in a higher flexibility, in particular for: (i) The representation of arbitrary complicated boundaries; (ii) Systematic rules for the developments of stable numerical schemes ap­ proximating mathematically wellposed problems, with various types of boundary conditions. On the other hand, compared to finite difference methods, this flexibility is paid by: an increased programming complexity; additional storage require­ ment. The application of finite element methods to fluid mechanics has been lagging behind and is relatively recent for several types of reasons: (i) Historical reasons: the early methods were invented by engineers for the analysis of torsion, flexion deformation of bearns, plates, shells, etc ... (see the historics in Strang and Fix (1972) or Zienckiewicz (1977». (ii) Technical reasons: fluid flow problems present specific difficulties: strong gradients,l of the velocity or temperature for instance, may occur which a finite mesh is unable to properly represent; a remedy lies in the various upwind finite element schemes which recently turned up, and which are reviewed in chapter 2 (yet their effect is just as controversial as in finite differences). Next, waves can propagate (e.g. in ocean dynamics with shallowwaters equations) which will be falsely distorted by a finite non regular mesh, as Kreiss (1979) pointed out. We are concerned in this course with the approximation of incompressible, viscous, Newtonian fluids, i.e. governed by N avier Stokes equations.