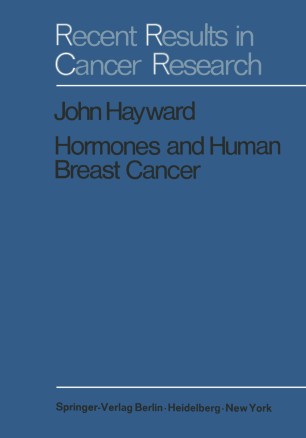 Seventeen years ago Mr. HAYWARD came to work in the Breast Clinic at Guy's Hospital. At that time the influence of hormones on the progress of breast cancer was appreciated; the prescription of androgens and oestrogens in the treatment of the advanced case was well established, and the operations of adrenalectomy and hypo­ physectomy had recently been introduced. Nevertheless, the prevailing view of the nature of breast cancer was that it was a local malignancy which had to be eradicated before it spread too widely and only if that had occurred would the aid of hormones be enlisted. How these hormones worked was unknown, indeed, today, as Mr. HAY­ WARD points out, their mode of action is still unknown. What has happened, however, within the last seventeen years has been a change of emphasis in our views regarding the essential nature of this disease. Instead of breast cancer being considered primarily as a local fault spreading centrifugally, it is realised with increasing con­ viction that it is a generalised disease with local manifestations and that one of the principal, if not the principal, aberration from normality lies in the endocrine environ­ ment. That this philosophy is demanding increasing acceptance is due in a significant measure to Mr. HAYWARD'S own investigations. In this work he has had the devoted assistance of BRIDGET WOLFF of the Breast Clinic at Guy's Hospital and the expert collaboration of Dr. R. D. BULBROOK of the Imperial Cancer Research Fund.