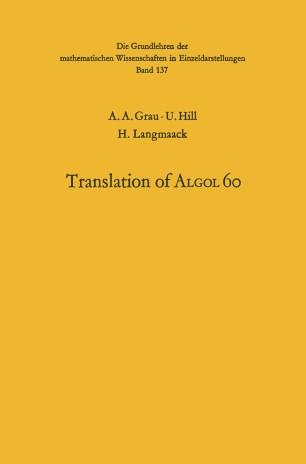 Volume I · Part b

Problem oriented programming languages as they have developed over the last ten years essentially serve two purposes which somewhat crudely can be described by the terms man-man communication and man-machine communication, respectively. As a carrier of information between humans, the problem oriented programming language is designed to express the essence of an algorithm in a way which is un­ ambiguous and concise as well as independent of (and therefore meaning­ ful without any reference to) the changing details of computing machine­ ry. As a carrier of information from man to computer, the language permits the human programmer to express his computational needs in a compact way adapted to the general characteristics of computers, but freed from the burdening details of specific computer facilities. This presupposes the existence of algorithms, or programs, which permit the computer itself to transform efficiently programs written in the problem oriented language into machine programs. Thus the entire computing community profits from the work of the individual programmer. The primary purpose of the Handbook is to present a set of algorithms of broad utility from the domain of numerical mathematics written in the problem oriented language ALGOL 60. Therefore, volumes I a and I b are in a sense supplementary as they serve to introduce this language. Volume I a gives a description of the language proper and of its use for writing correct programs. Thus, volume I a primarily covers the aspect of man-man communication by means of ALGOL 60.