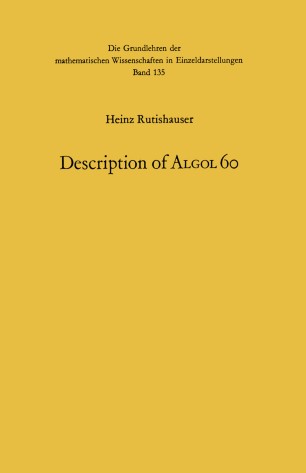 Volume I · Part a Description of ALGOL 60

Automatic computing has undergone drastic changes since the pioneering days of the early Fifties, one of the most obvious being that today the majority of computer programs are no longer written in machine code but in some programming language like FORTRAN or ALGOL. However, as desirable as the time-saving achieved in this way may be, still a high proportion of the preparatory work must be attributed to activities such as error estimates, stability investigations and the like, and for these no programming aid whatsoever can be of help. In this respect, ALGOL, as an internationally standardized notation which avoids computer-oriented concepts, provides another advantage, not often mentioned, but one which was already the guiding principle at the very beginning of the programming language venture: indeed, a correct ALGOL program is the abstractum of a computing process for which the necessary analyses have already been performed. It is the very purpose of this Handbook to establish such abstract formulations of certain computing processes. Therefore, numerical methods given in this Hand­ book in the form of ALGOL procedures may be put to immediate use wherever ALGOL is known and understood; in fact, application of such a method reduces to little more than calling the corresponding procedure.