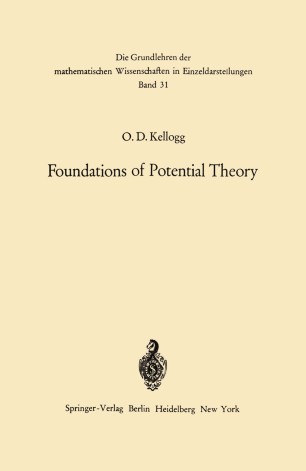 The present volume gives a systematic treatment of potential functions. It takes its origin in two courses, one elementary and one advanced, which the author has given at intervals during the last ten years, and has a two-fold purpose: first, to serve as an introduction for students whose attainments in the Calculus include some knowledge of partial derivatives and multiple and line integrals; and secondly, to provide the reader with the fundamentals of the subject, so that he may proceed immediately to the applications, or to the periodical literature of the day. It is inherent in the nature of the subject that physical intuition and illustration be appealed to freely, and this has been done. However, that the book may present sound ideals to the student, and in order also serve the mathematician, both for purposes of reference and as a basis for further developments, the proofs have been given by rigorous methods. This has led, at a number of points, to results either not found elsewhere, or not readily accessible. Thus, Chapter IV contains a proof for the general regular region of the divergence theorem (Gauss', or Green's theorem) on the reduction of volume to surface integrals. The treatment of the fundamental existence theorems in Chapter XI by means of integral equations meets squarely the difficulties incident to ·the discontinuity of the kernel, and the same chapter gives an account of the most recent developments with respect to the Dirichlet problem.