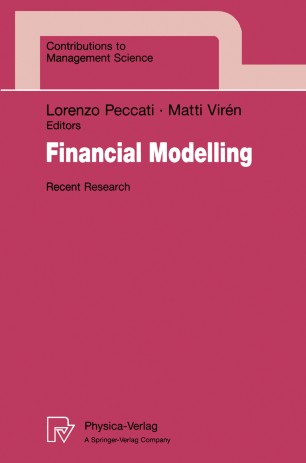 The volume collects a selection of papers presented and discussed during the two Meetings held in 1992 of the EURO Working Group on Financial Modelling. In April the works were held in Cogne (Aosta Valley - Italy) and in November in Turku (Finland). The Group was founded eight years ago and at present is formed by some hundreds of people from over ten European countries and from the United States. The unusually high rythm of two Meetings per years has been always kept, with the exception of one of the first years. This reveals the strong vitality of this community. The wide variety of papers presented and discussed, together with the originality of their approach and of the results, also witnesses the quality of the work the Group is doing in Finance. There are more than one way to work in this fastly growing field. A largely diffused approach is mainly oriented in building theories to be cast within some general economic paradigm. If some simplifications are needed to get perfect theoretical coherence with the preferred paradigm, they are easily accepted. The most diffuse approach within the Group, although attenctive to general theories, tries sometimes to build workable models where many relevant details of the reality are captured even if the price is not to adhere to some general theory. This does not mean, of course, that the Group is against general paradigms.