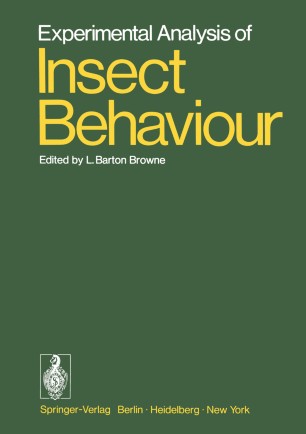 This volume has come about as a direct result of a Symposium entitled "Experimental Analysis of Insect Behaviour" which was an important con­ tribution to the 14 International Congress of Entomology held in Canberra, Australia, in August 1972 under the joint sponsorship of the Australian Academy of Science and the Australian Entomological Society. It is not, however, strictly Symposium proceedings. I have included, in this volume contributions from several workers who had to withdraw from the Symposium at a fairly late stage. Furthermore, quite intentionally, a number of the contributions bear only a general relationship to the papers given at the Congress. To permit this; the deadline for contribu­ tions was set at some six months after the Symposium. I imposed no restrictions on the form of the contributions. I did, however, indicate that speculative reviews highlighting the author's own recent research or that of his immediate colleagues would be particularly acceptable, and a number of the contributors have taken the opportunity to write this kind of paper. Several contributors, notably those whose task it was to give more general papers in the Symposium itself, have written reviews of somewhat greater scope.