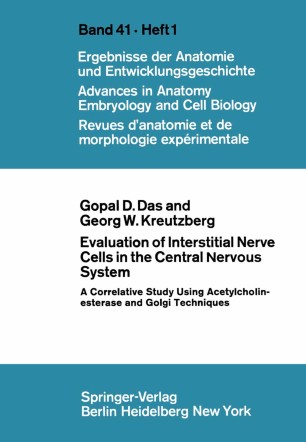 Evaluation of Interstitial Nerve Cells in the Central Nervous System

The presence of nerve cells in the white matter of the spinal cord and in the spinal and cranial nerves has attracted the attention of some researchers in the past. Because of their location in such unexpected regions, these neurons provided a rich field of speculation regarding their nature and function. This was partic­ ularly true about the nerve cells lying in the spinal white matter. From phylogenetic considerations, neurons in the spinal white matter are present more abundantly in amphibians, reptiles and brids than in mammals. A. brief survey of literature on lower vertebrates indicates that GASKELL (1885, 1889) was the first to describe the displaced neurons in the white matter of the spinal cord of alligators and various species of birds. In his consideration they were displaced ganglion cells. In 1902 von KOELLIKER gave an exhaustive account of such neurons in the white matter of the spinal cord of reptiles and birds. In these animals he observed clusters of such neurons running in longitudinal columns and thus was able to group them into nuclei known as "Hofmann's nuclei". Further, he suggested that these nuclei arise from the mass of the ventral horn and that they may give rise t. o preganglionic fibers, motor fibers or ventral commissural fibers. In t. he ensuing years investigation of these nuclei was extended by STREE­ TER, KRAUSE, TERNI, HUBER and others (quoted from ARIENS KAPPERS et. aI. , 1960, Vol. I, p. 206-210).