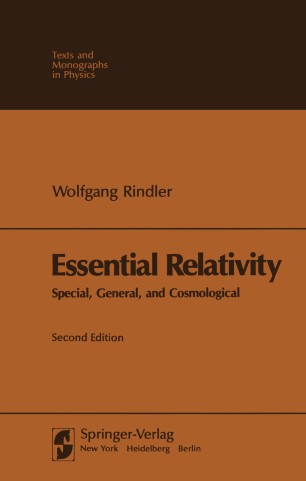 Part of the Text and Monographs in Physics book series (TMP)

In retrospect, the first edition of this book now seems like a mere sketch for a book. The present version is, if not the final product, at least a closer approximation to it. The table of contents may show little change. But that is simply because the original organization of the material has been found satisfactory. Also the basic purpose of the book remains the same, and that is to make relativity come alive conceptually. I have always felt much sym­ pathy with Richard Courant's maxim (as reported and exemplified by Pascual Jordan) that, ideally, proofs should be reached by comprehension rather than computation. Where computations are necessary, I have tried to make them as transparent as possible, so as not to hinder the progress of comprehension. Among the more obvious changes, this edition contains a new section on Kruskal space, another on the plane gravitational wave, and a third on linearized general relativity; it also contains many new exercises, and two appendices: one listing the curvature components for the diagonal metric (in a little more generality than the old" Dingle formulas "), and one syn­ thesizing Maxwell's theory in tensor form. But the most significant changes and additions have occurred throughout the text. Many sections have been completely rewritten, many arguments tightened, many "asides" added, and, of course, recent developments taken into account.