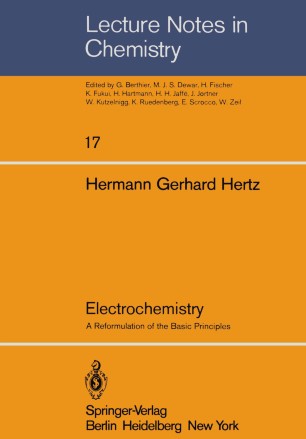 A Reformulation of the Basic Principles

In this book a presentation of a phenomenological theory of elec­ trochemistry is given. More precisely, it should be stated that only one part of the whole field of electrochemistry is developed. It is the purpose of this treatment to describe the interconnection between the electric current in a composite thermodynamic system and the rate of production of a certain substance on the one side, the rate of deple­ tion of another substance on the other side, and the work per unit time which has to be delivered to or is supplied by the system. The last part of this programme leads to the computation of the electric potential or the electromotive force of a typical arrangement called a galvanic cell. It will only be the electric current~ which is considered, not the change of the electric current per unit time, i.e. d~/P{t • The vari­ ation of Jz with time would have to be the subject of the second part of this new treatment of electrochemistry.