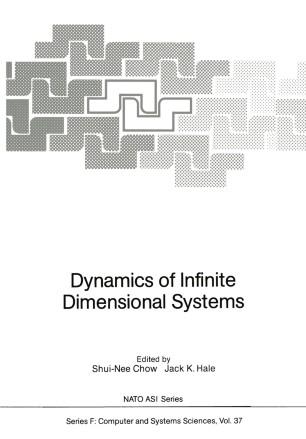 The 1986 NATO Advanced Study Insti tute on Dynamics of Infini te Dimensional Systems was held at the Instituto Superior Tecnico. Lisbon. Portugal. In recent years. there have been several research workers who have been considering partial differential equations and functional differential equations as dynamical systems on function spaces. Such approaches have led to the formulation of more theoretical problems that need to be investigated. In the applications. the theoretical ideas have contributed significantly to a better understanding of phenomena that have been experimentally and computationally observed. The investigators of this development come wi th several different backgrounds - some from classical partial differential equations. some from classical ordinary differential equations and some interested in specific applications. Each group has special ideas and often these ideas have not been transmitted from one group to another. The purpose of this NATO Workshop was to bring together research workers from these various areas. It provided asoundboard for the impact of the ideas of each respective discipline. We believe that goal was accomplished. but time will be a better judge. We have included the list of participants at the workshop. with most of these giving a presentation. Although the proceedings do not include all of the presentations. it is a good representative sampie. We wish to express our gratitude to NATO. and.to Dr. M. di Lullo of NATO. who unfortunately did not live to see the completion of this project.