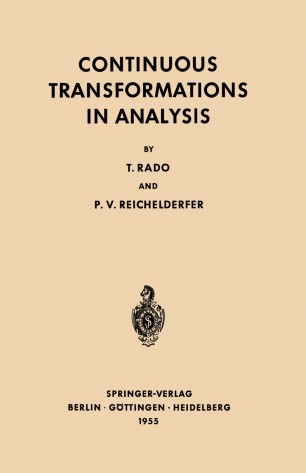 With an Introduction to Algebraic Topology

The general objective of this treatise is to give a systematic presenta­ tion of some of the topological and measure-theoretical foundations of the theory of real-valued functions of several real variables, with particular emphasis upon a line of thought initiated by BANACH, GEOCZE, LEBESGUE, TONELLI, and VITALI. To indicate a basic feature in this line of thought, let us consider a real-valued continuous function I(u) of the single real variable tt. Such a function may be thought of as defining a continuous translormation T under which x = 1 (u) is the image of u. About thirty years ago, BANACH and VITALI observed that the fundamental concepts of bounded variation, absolute continuity, and derivative admit of fruitful geometrical descriptions in terms of the transformation T: x = 1 (u) associated with the function 1 (u). They further noticed that these geometrical descriptions remain meaningful for a continuous transformation T in Euclidean n-space Rff, where T is given by a system of equations of the form 1-/(1 ff) X-I U, . . . ,tt ,. ", and n is an arbitrary positive integer. Accordingly, these geometrical descriptions can be used to define, for continuous transformations in Euclidean n-space Rff, n-dimensional concepts 01 bounded variation and absolute continuity, and to introduce a generalized Jacobian without reference to partial derivatives. These ideas were further developed, generalized, and modified by many mathematicians, and significant applications were made in Calculus of Variations and related fields along the lines initiated by GEOCZE, LEBESGUE, and TONELLI.