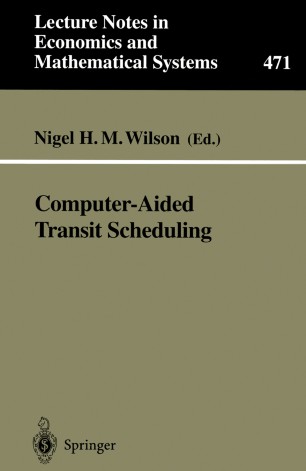 This proceedings volume consists of papers presented at the Seventh International Workshop on Computer-Aided Scheduling of Pllblic Transport, which was held at th th the Massachusetts Institute of Technology from August 5 to 8 , 1997. In the tradition of alternating Workshops between North American and Europe - Chicago (1975), Leeds (1980), Montreal (1983), Hamburg (1986), Montreal (1990), and Lisbon (1993), Cambridge (Massachusetts, USA) was selected for the Workshop in 1997. As in earlier workshops, the central theme dealt with vehicle and crew scheduling problems and the development of software systems incorporating operations research techniques for operational planning in public transport. However, following the trend that started in Hamburg in 1987, the scope of this Workshop was broadened to include topics in related fields. Two trends underlie this. First, the recognition that the core scheduling issues in public transport have important common elements with other application areas in which extensive work is also underway, and that it is vital to learn from these other initiatives. Second, while scheduling is indeed a core problem in public transport planning, and has shown the first and greatest benefits from computer application, it is intimately related to the preceding tasks in the planning hierarchy, such as service design, and the following tasks such as operations control and public information.