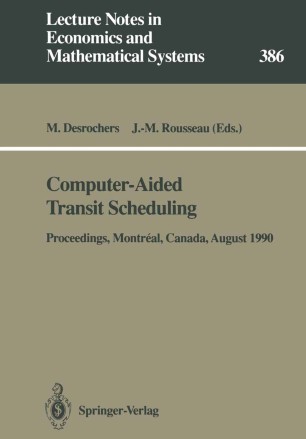 This volume consists of papers presented at the Fifth International Workshop on Computer­ Aided Scheduling of Public Transport, which was held in Montreal from August 19th to the 23rd, 1990. Since the first Workshop in Chicago in 1975 the field had matured considerably. In 1975, there were no presentations that described systems which had been implemented and used on a regular basis. By 1980, in Leeds, and certainly by 1983, in Montreal, several systems were in regular use. They were based on both heuristics and mathematical programming techniques. In 1990, there were more than one hundred transit companies using computer-aided scheduling tools in their regular operations. The scope of the Workshop was broadened in 1987, in Hamburg, so that topics related to scheduling may be introduced. We find, for example, in this book several papers on the technology related to the collection of data and/or the data bases required for scheduling and planning activities.