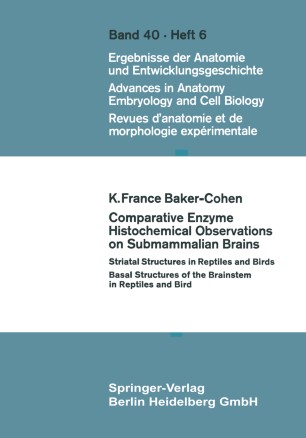 Comparative neurological studies of the evolutionary development of struc­ tures within the central nervous system of vertebrates have depended to a large extent upon morphological rather than functional criteria. Classical comparative anatomical studies, which have attempted to demonstrate homologies between parts of the brain in representatives of different vertebrate classes may be grouped under three general headings: 1. comparison of the embryological development of brain structures; 2. comparison in adult forms of the topographical relations of neuron groupings and fiber tracts, and of the morphology of cell types ( cyto­ architectonics); and 3. analysis and comparison of fiber connections between particular cell groupings or regions. Of these three, the third encompasses func­ tional relationships most directly, but even in well-defined fiber tracts the direction of conduction often remains indefinite, and the extent and activity of more diffuse systems is poorly known. In recent years a nurober of investigations applying electrophysiological and degeneration methods to submammalian forms have been reported. Those most pertinent to the present studies include the papers of . ARMSTRONG et al. (1953), KRUGERand associates (e. g. HERIC and KRUGER, 1966; KRUGERand BERKOWITZ, 1960; PowELL and KRUG ER, 1960}, GusEL'NIKov and SUPIN (1964) and KARA­ MYAN and BELEKJIOVA (1964) on various reptiles, and of PowELL and CowAN (1961), KARTEN and REVZIN (1966) and REVZIN and KARTEN (1967) on the pigeon.