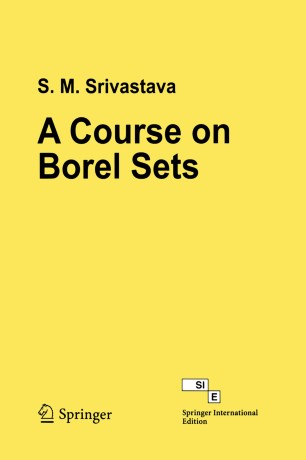 A Course on Borel Sets

The roots of Borel sets go back to the work of Baire [8]. He was trying to come to grips with the abstract notion of a function introduced by Dirich­ let and Riemann. According to them, a function was to be an arbitrary correspondence between objects without giving any method or procedure by which the correspondence could be established. Since all the specific functions that one studied were determined by simple analytic expressions, Baire delineated those functions that can be constructed starting from con­ tinuous functions and iterating the operation 0/ pointwise limit on a se­ quence 0/ functions. These functions are now known as Baire functions. Lebesgue [65] and Borel [19] continued this work. In [19], Borel sets were defined for the first time. In his paper, Lebesgue made a systematic study of Baire functions and introduced many tools and techniques that are used even today. Among other results, he showed that Borel functions coincide with Baire functions. The study of Borel sets got an impetus from an error in Lebesgue's paper, which was spotted by Souslin. Lebesgue was trying to prove the following: Suppose / : )R2 -- R is a Baire function such that for every x, the equation /(x,y) = 0 has a. unique solution. Then y as a function 0/ x defined by the above equation is Baire.