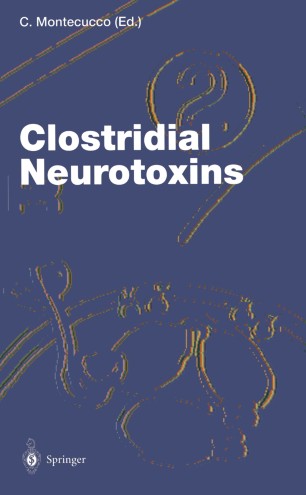 The Molecular Pathogenesis of Tetanus and Botulism

Tetanus has been known from the very beginning of medical literature since it was first described by Hyppocrates of Cos in the fifth century B.C. For 24 centuries it was considered a neuro­ logical disease until the breakthrough of CARLE and RATIONE (1884) who demonstrated its infectious etiology. Following the establishment of purified cultures of Clostridium tetani(KITASATO 1889), FABER (1890), and TIZZONI and CATIANI (1890) demon­ strated that the disease is actually an intoxication caused by a proteic neurotoxin. This toxin was shown by BRUSHCHETIINI (1892) to move retroaxonally and to act at the spinal cord level. Soon thereafter VAN ERMENGEN (1897) demonstrated that botu­ lism is also due to intoxication with a protein toxin produced by bacteria of the genus Clostridium. These bacteria and their spores and ubiquitous, and the majority of them do not produce neurotoxins. The selective advantage of producing such potent toxin is still a matter of speculation (see Popoff, this volume). The next major advance was the discovery that tetanus neurotoxin 1 can be converted by formaldehyde treatment to a nonpathogenic but still fully immunogenic form, and that this can be used successfully as a vaccine to prevent tetanus (RAMON and DESCOMBEY 1925). Similar vaccines (toxoids) can be prepared with botulism neurotoxins (see MiDDLEBROOK and BROWN, this volume). The prevention oftetanus by vaccination (see Galatzka and Gasse, this volume) is one of the great successes of basic research coupled with an efficient public medicine service.