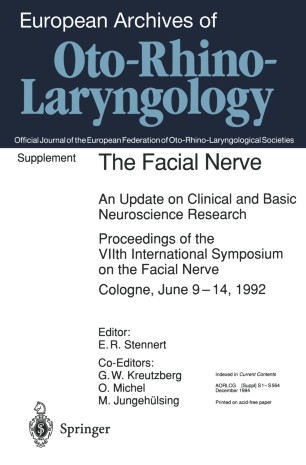 An Update on Clinical and Basic Neuroscience Research

The intention of the VIIth International Symposium on the Facial Nerve was to create a platform for an extensive exchange of knowledge and scientific infor­ mation between clinicians and basic research workers. This aim could only be realized on the basis of a common interest in the facial nerve, which unites the interdisciplinary scientific efforts of otologists, neurosurgeons, facial plastic surgeons, neurologists, neurophysiologists, and neuroanatomists. Therefore, a meeting of this kind remains in its aim to exchange ideas over scientific disciplines which do not come unique together normal conditions. The symposium has been held every four years since 1966. The VIIth sym­ posium was preceded by symposia in Stockholm (1966), Osaka (1970), ZUrich (1976), Los Angeles (1980), Bordeaux (1984) and Rio de Janeiro (1988), and marked an important milestone in the continuously developing knowledge about the facial nerve, its physiology, disorders, diagnostics and treatment. In contrast to the previous meetings this symposium extended in vitations to both clinicians and basic research workers. More than 350 scientists from 25 different nations met in Cologne, Germany, in June 1992 and their high-level presentations contributed to the overwhelming success of this international meeting. The symposium took place in the vicinity of the old cllthedral of Cologne, itself a vivid symbol of never-ending efforts to create something perfect and lasting.