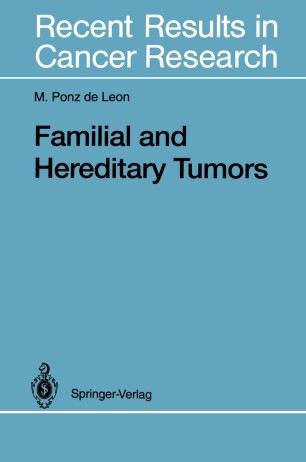 For many years the etiology of human tumors has almost exclusively been attributed to environmental factors, which seemed to be involved not only in the induction of neo­ plasms but also in other phases of tumorigenesis. Cigarette smoking and alcohol are the two best known examples of factors related to our modern lifestyle which have been implicated in the development of cancer of various organs. From the 1960s onward, the pioneer work of a few investigators clearly showed that hereditary factors were not only related to rare neoplasms, but could also be respon­ sible for the occurrence of a sizeable fraction of tumors that do not usually show features of inheritance (as in the case of breast or colorectal cancer). Thus, the idea that some common human malignancies could be transmitted from one generation to another with features of mendelian gene­ tics became more and more evident. In addition, the verit­ able explosion of molecular biology in the last 15 years has made a further and substantial contribution to the emerging role of genetics in biomedical research and particularly in cancer.