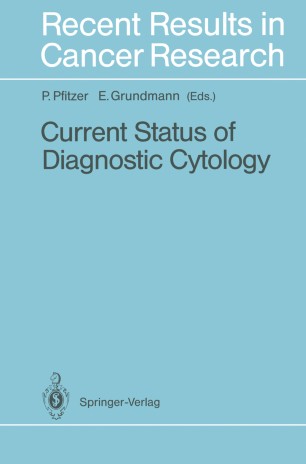 Progress in science is often promoted by a new method. Diagnostic cytology, however, developed slowly over a whole century, mainly in differentiating malignant from benign cells from various tissues. The decisive step in this development was the intensive investigation of one local­ ization by Papanicolaou: The application of cytology for screening in the field of gynecologic oncology made it an acknowledged technique. Consequently, materials inves­ tigated before were tested again on a larger scale and new ones were included into the program. The possibility of a wide-range application of this diag­ nostic method, which carries a low risk for the patient and is low in cost, attracted the specialists of many fields. One of the problems which has resulted is the coordination of training and quality assurance for a large group of people from different fields and with different interests and whose experience in morphology varies. In this volume general problems of cytology are dis­ cussed, as is the question "who is a medical cytologist?" Education and training are the topics of the contributions by Coleman, Holzner, Jenny, Koss and Muller, cover­ ing the situation in the European Community, Germany, Austria, Switzerland, and the USA. A special contribu­ tion by Lange concerns the situation of cytotechnologists, paramedicals important for cytologic screening programs.