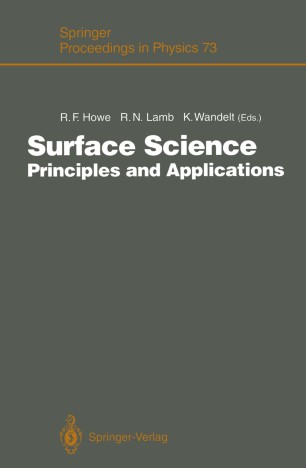 Surface science has existed as a recognized discipline for more than 20 years. During this period, the subject has expanded in two important ways. On the one hand, the techniques available for studying surfaces, both experimental and theoretical, have grown in number and in sophistication. On the other hand, surface science has been applied to an increasing number of areas of technology, such as catalysis, semicon­ ductor processing, new materials development, corrosion prevention, adhesion and tribology. . There is, however, no sharp division between fundamental and applied surface science. New techniques can immediately be applied to technologically important problems. Improvements in understanding of fundamental phenomena such as epi­ taxial growth of one metal on another, or the bonding of hydrocarbons to metal sur­ faces, to name just two examples, have direct consequences for technology. Surface science has also become very much an interdisciplinary subject; physics, chemistry, materials science, chemical and electronical engineering all draw upon and contribute to surface science. The intimate relationship between principles and applications of surface science forms the theme of this proceedings volume. The contributions were all presented as invited lectures at an Australian-German Workshop on Surface Science held at Coogee Beach, Sydney, Australia, in December 1991. The contributors, all active surface scientists in their respective countries, were asked to highlight recent develop­ ments in their own areas of activity involving new techniques, advances in funda­ mental understanding or new applications in technology.