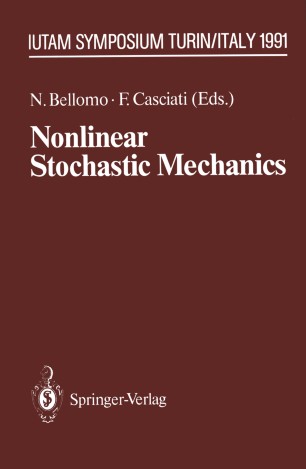 The Symposium, held in Torino (lSI, Villa Gualino) July 1-5, 1991 is the sixth of a series of IUTAM-Symposia on the application of stochastic analysis to continuum and discrete mechanics. The previous one, held in Innsbruck (1987), was mainly concentrated on qual­ itative and quantitative analysis of stochastic dynamical systems as well as on bifurcation and transition to chaos of deterministic systems. This Symposium concentrated on fundamental aspects (stochastic analysis and mathe­ matical methods), on specific applications in various branches of mechanics, engineering and applied sciences as well as on related fields as analysis of large systems, system identifica­ tion, earthquake prediction. Numerical methods suitable to provide quantitative results, say stochastic finite elements, approximation of probability distribution and direct integration of differential equations have also been the object of interesting presentations. Specific topics of the sessions have been: Engineering Applications, Equivalent Lineariza­ tion of Discrete Stochastic Systems, Fatigue and Life Estimation, Fluid Dynamics, Numerical Methods, Random Vibration, Reliability Analysis, Stochastic Differential Equations, System Identification, Stochastic Control. We are indebted to the IUTAM Bureau for having promoted and sponsored this Sympo­ sium and the Scientific Committee for having collaborated to the selection of participants and lecturers as well as to a prompt reviewing of the papers submitted for publication into these proceedings. A special thank is due to Frank Kozin: the organization of this meeting was for him ';ery important; he missed the meeting but his organizer ability was present.