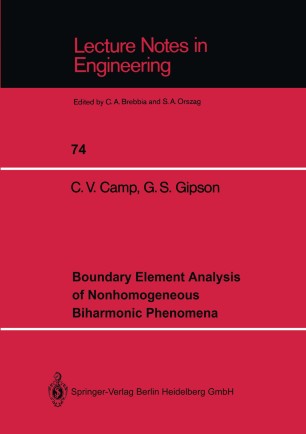 At the date of this writing, there is no question that the boundary element method has emerged as one of the major revolutions on the engineering science of computational mechanics. The emergence of the technique from relative obscurity to a cutting edge engineering analysis tool in the short space of basically a ten to fifteen year time span is unparalleled since the advent of the finite element method. At the recent international conference BEM XI, well over one hundred papers were presented and many were pub­ lished in three hard-bound volumes. The exponential increase in interest in the subject is comparable to that shown in the early days of finite elements. The diversity of appli­ cations of BEM, the broad base of interested parties, and the ever-increasing presence of the computer as an engineering tool are probably the reasons for the upsurge in pop­ ularity of BEM among researchers and industrial practitioners. Only in the past few years has the BEM audience become large enough that we have seen the development of specialty books on specific applications of the boundary element method. The present text is one such book. In this work, we have attempted to present a self-contained treatment of the analysis of physical phenomena governed by equations containing biharmonic operators. The biharmonic operator defines a very important class of fourth-order PDE problems which includes deflections of beams and thin plates, and creeping flow of viscous fluids.