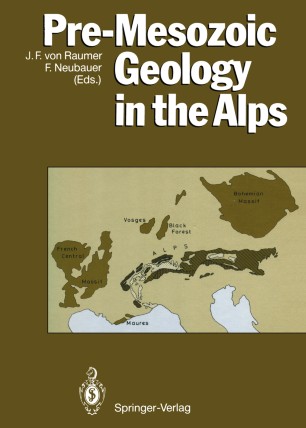 Pre-Mesozoic Geology in the Alps

The Alps are an arched mountain chain stretching 1500 km between Vienna and Graz in Austria and Genova in Italy. They resulted from the collision of the African and Laurasian plates during Mesozoic and Tertiary times. The high standard of knowledge attained over the last 30 years by the working groups on "Alpine Metamorphism" is well known and helped considerably to recognize pre-Mesozoic elements in the Alps. In Part I of this book the subdivision of the major Alpine units and pre-Mesozoic pal­ inspastic reconstructions are covered before discussion of the pre-Mesozoic geology in Parts II, III and IV It is understood that the Mesozoic and later events overprinted pre-existing structures veiling the earlier history and the nature of protoliths. Although the Alpine overprint does not facilitate the recognition of older struc­ tures, pre-Mesozoic basement units were recognized during the first beginnings of geological observations in the Alps, about 200 years ago. Fifty percent of the Alpine domain is underlain by basement units that have been unconformably covered since Permian and Mesozoic times. This basement appears today in a complex pattern among the Alpine structures. The history of their discovery and explanation, parallel with a growing sophistication of research methods, are the subject of the introductory chapter of Part II.