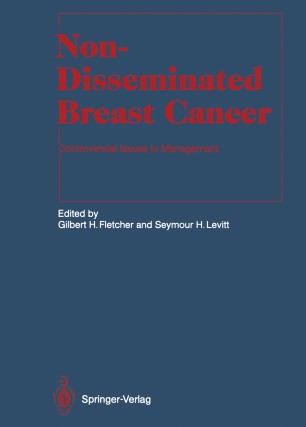 In the last two decades, there has been a major increase in the actual numbers of women diagnosed with breast cancer (from 65000 new cases 20 years ago in the United States to 183000 in 1993). Concomitant with this has been a shift toward making the diagnosis earlier and toward diagnosing an earlier stage ofthe disease (more than 70% of diagnoses were of advanced-stage disease two decades ago, whereas more than 70% of diagnoses are now earlier-stage disease in 1992). These changes are clearly related to the woman's greater sensitivity to abnormalities in the breast and her seeking medical care, to the physician's greater awareness of the potential diagnosis of cancer, and to the major and important impact of mammographic screening. These changes have had a major impact on the questions of appropriate treatment, thereby contributing to the controversies in the disease. What is the role of surgery? What are the respective advantages of radical mastectomy, modified radical mastectomy, and conservation surgery with and without supplementary treatment? What is the role of radiation therapy? When should radiation therapy be performed after mastectomy, and what volumes should be irradiated post mastectomy? Where is radiation therapy indicated after conservation surgery, and when is radiation therapy an effective palliative treatment measure? When should chemotherapy and/or hormonal therapy be used as an adjuvant to primary treatment and when as an effective palliative treatment? This book by Levitt and Fletcher addresses these critical and important issues.