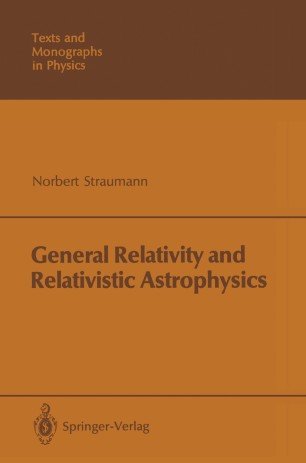 In 1979 I gave graduate courses at the University of Zurich and lectured in the 'Troisieme Cycle de la Suisse Romande' (a consortium offour uni­ versities in the french-speaking part of Switzerland), and these lectures were the basis of the 'Springer Lecture Notes in Physics', Volume 150, published in 1981. This text appeared in German, because there have been few modern expositions of the general theory of relativity in the mother tongue of its only begetter. Soon after the book appeared, W. Thirring asked me to prepare an English edition for the 'Texts and Mono­ graphs in Physics'. Fortunately E. Borie agreed to translate the original German text into English. An excellent collaboration allowed me to re­ vise and add to the contents of the book. I have updated and improved the original text and have added a number of new sections, mostly on astrophysical topics. In particular, in collaboration with M. Camenzind I have included a chapter on spherical and disk accretion onto compact objects. This book divides into three parts. Part I develops the mathematical tools used in the general theory of relativity. Since I wanted to keep this part short, but reasonably self-contained, I have adopted the dry style of most modern mathematical texts. Readers who have never before been confronted with differential geometry will find the exposition too ab­ stract and will miss motivations of the basic concepts and constructions.