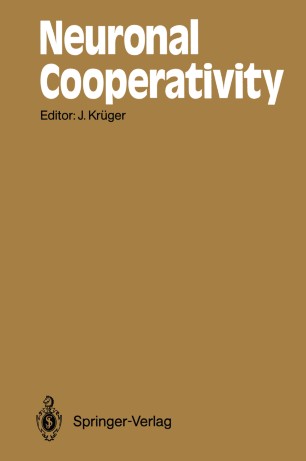 Soon after the technique of micro electrode recording had become a routine method in the 1950s, many researchers felt that an obvious next step was to in­ vestigate the behaviour of larger networks of interacting cells. However, despite many early efforts, very little progress was made in that direction: a conceptual basis had not yet evolved, and the computer as an analytical tool was not avail­ able. This has now changed, with the result that the cooperation of neurons is again becoming a focus of interest. In 1987, with the support of the Volkswagen Foundation, I was able to organize a conference on the subject of neuronal cooperativity near Freiburg, W. Germany, bringing together theoreticians and experimentalists working in this field. It became clear that many new theoretical concepts had evolved since the early days but that experiments on the subject were still difficult. Later, with the encouragement of Professor H. Haken, editor of the Springer Series in Synergetics, I decided to ask a number of experimentalists, many of whom had participated in the conference, to contribute to a book. The aim was not to focus exclusively on the newest results but rather to give an overall idea of how the difficult question of cooperativity can be approached experimentally.