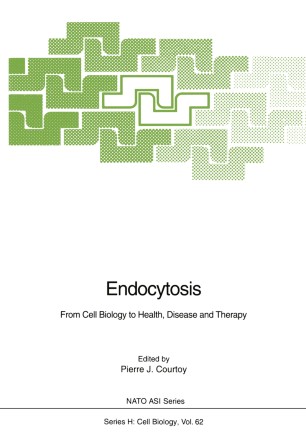 From Cell Biology to Health, Disease and Therapy

(Director: Pierre J. COURTOY) Two years after its first gathering in Oeiras, Portugal, the European Endocytosis Group convened for a second workshop at the Pasteur Institute, Paris, on October 1-5, 1990. The meeting is reported in detail in this volume; a preliminary coverage, based on the overviews of each session, has appeared in the New Biologist (1991, 3:243-252). The three main objectives, to broaden the audience, to present a more comprehensive view of the multiple aspects of endocytosis, from basic biology to health, disease and therapy, as well as to clarify controversial issues, have been largely fulfilled. The Second European Workshop on Endocytosis was attended by more than tOO participants, originating from 18 countries. 59 lectures and 35 posters were presented. In addition, vivi~ roundtables allowed to thoroughly discuss the dynamics and the regulation of the endocytic apparatus, as well as the role of endocytosis in antigen presentation. Endocytosis is a general and distinctive property of all eukaryotic cells, including protists, plants and fungi.