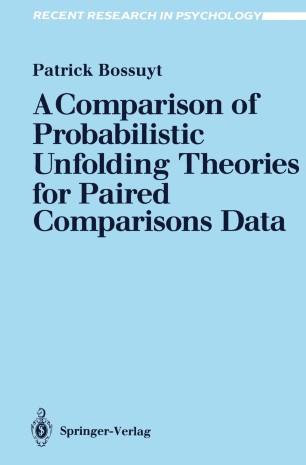 A Comparison of Probabilistic Unfolding Theories for Paired Comparisons Data

Some data-analytic methods excel by their sheer elegance. Their basic principles seem to have a particular attraction, based on a intricate combination of simplicity, deliberation, and power. They usually balance on the verge of two disciplines, data-analysis and foundational measurement, or statistics and psychology. To me, unfolding has always been one of them. The theory and the original methodology were created by Clyde Coombs (1912-1988) to describe and analyze preferential choice data. The fundamental assumptions are truly psy­ chological; Unfolding is based on the notion of a single peaked preference function over a psychological similarity space, or, in an alternative but equivalent expression, on the assumption of implicit comparisons with an ideal alternative. Unfolding has proved to be a very constructive data-analytic principle, and a source of inspiration for many theories on choice behavior. Yet the number of applications has not lived up to the acclaim the theory has received among mathematical psychologists. One of the reasons is that it requires far more consistency in human choice behavior than can be expected. Several authors have tried to attenuate these requirements by turning the deterministic unfolding theory into a probabilistic one. Since Coombs first put forth a probabilistic version of his theory, a number of competing proposals have been presented in the literature over the past thirty years. This monograph contains a summary and a comparison of unfolding theories for paired comparisons data, and an evaluation strategy designed to assess the validity of these theories in empirical choice tasks.