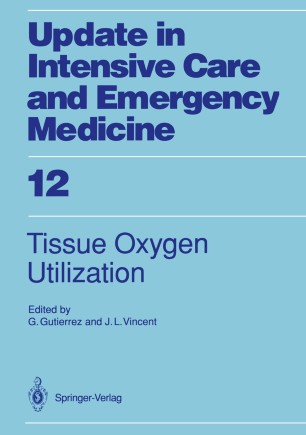 Disturbances in peripheral O extraction can be produced in dogs treated with 2 endotoxin and thereby provide an opportunity to test theories for the origin of pathological O supply dependency or to try different treatment modalities. The 2 most serious deficiency in the current animal models is the inability to mimic the increased O demand that is observed in patients at 02 delivery rates in excess of 2 normal. A particular feature of this increased O demand is that it apparently does 2 not stimulate increased 02 extraction, although the limitation in O extraction has 2 not been explored in patients by lowering 02 supply, for obvious reasons. At least two possibilities to account for increased 02 demand could be investigated in animal models, however. The amount of 02 that is utilized in extramitochondrial pathways, which is normally on the order of 10%, may be greatly increased in ARDS and sepsis by O radical formation. There is presently no information 2 concerning how much 02 might be used in this way. Another strong possibility is that mitochondrial injury, perhaps as a result of 02 radical formation, uncouples oxidative phosphorylation. Some evidence presently in the literature supports this idea [19]. Indeed, the association of increased blood lactate levels with higher than expected 02 demands makes uncoupling a very attractive hypothesis that warrants further investigation in animal models using such agents as 2,4-dinitrophenol. References 1.