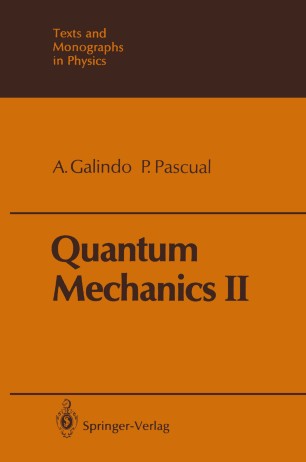 The first edition of this book was published in 1978 and a new Spanish edition in 1989. When the first edition appeared, Professor A. Martin suggested that an English translation would meet with interest. Together with Professor A. S. Wightman, he tried to convince an American publisher to translate the book. Financial problems made this impossible. Later on, Professors E. H. Lieb and W. Thirring proposed to entrust Springer-Verlag with the translation of our book, and Professor W. BeiglbOck accepted the plan. We are deeply grateful to all of them, since without their interest and enthusiasm this book would not have been translated. In the twelve years that have passed since the first edition was published, beautiful experiments confirming some of the basic principles of quantum me­ chanics have been carried out, and the theory has been enriched with new, im­ portant developments. Due reference to all of this has been paid in this English edition, which implies that modifications have been made to several parts of the book. Instances of these modifications are, on the one hand, the neutron interfer­ ometry experiments on wave-particle duality and the 211" rotation for fermions, and the crucial experiments of Aspect et al. with laser technology on Bell's inequalities, and, on the other hand, some recent results on level ordering in central potentials, new techniques in the analysis of anharmonic oscillators, and perturbative expansions for the Stark and Zeeman effects.